Stay up-to-date on the next content published on the knowledge hub!

For many years prior to the industrialization and mechanization of agriculture in the early to mid-20th century cover crops were an integral component of many farm operations – Thomas Jefferson even wrote about them in his farm journal. In modern agriculture cover crops have gained immense popularity amongst progressive and innovative farmers and ranchers as research validating their benefits continues to pile up. Vaguely explained lists of cover crop benefits are ubiquitous in agronomy related publications but to successfully master the art of cover cropping to accomplish a specific resource concern (i.e. to build soil C) one must understand how the soil works. Agoro’s agronomists specialize in conservation agronomy and take pride in staying up to date on primary literature relating to soil carbon sequestration. The importance of this is huge; as soil scientists continue to learn from research they continue to challenge current thinking of how carbon functions in soils. This quote in Quanta Magazine from July 2021 summarizes the conundrum:

But over the past 10 years or so, soil science has undergone a quiet revolution, akin to what would happen if, in physics, relativity or quantum mechanics were overthrown. Except in this case, almost nobody has heard about it – including many who hope soils can rescue the climate. “There are a lot of people who are interested in sequestration who haven’t caught up yet,” said Margaret Torn, a soil scientist at Lawrence Berkeley National Laboratory.

Despite soil scientists’ newfound lack of knowledge on the exact mechanisms of soil C storage there is little to no doubt that cover crops not only lead to more carbon in the soil but also result in a litany of other benefits, such as weed suppression (Ryan et al. 2011), increased rainfall infiltration (Chalise et al. 2018), and improved soil structure (Kladivko and Rorick 2017). Both research and farmer experiences have proven that cover crops can provide agronomic and economic reward when management decisions are made using unbiased data from credible sources. For example, modern agronomic research has dispelled the idea that cover crops lead to a loss in yield. Marcillo and Miguez (2017) published a meta-analysis, which is a review of multiple research articles, that looked at results from over 65 studies conducted in the U.S. and Canada relating to the effect of cover cropping on corn and soybean yields. The authors found no evidence to suggest that cover crops negatively impacted corn or soybean yields if managed properly.

Furthermore, some have questioned a cover crop’s ability to sequester carbon, but this too has been cleared up by research. Researchers from Virginia Tech published a meta-analysis reviewing 581 different studies around the globe that each looked at how cover crops affect soil carbon accumulation. They concluded, “Our results showed that including cover crops into rotations significantly increased SOC, with an overall mean change of 15.5%” (Jian et al. 2020). Agoro’s agronomists use the data from this large pool of research as a guideline to better understand the exact management practices needed to sequester carbon on an individual farm’s soils. In addition to data from research, Agoro greatly values the experience of early cover crop adopters and has created a farmer ambassador network for our partner farmers. This means farmers who sign a contract with Agoro will have access to not only a team of specialized agronomists but also to farmers in their region who have mastered cover crops on their operation.

Most carbon is relatively inert in the soil and often responds slowly to management. Additionally, the carbon cycle is cyclical – every carbon molecule in the soil will eventually be lost to the atmosphere at some point with the most recalcitrant forms of soil carbon likely persisting for thousands of years. Soil carbon exists on a spectrum with one end containing highly decomposed forms of C that are very resistant to mineralization (the process of microbes oxidizing soil C into CO2 while simultaneously releasing nutrients into a plant-available form) and the other end consisting of labile or active carbon (roots, plant residue, microbial biomass, etc.) that is immediately available for microbial mineralization. The vast majority (65-70%) of soil carbon exists in the recalcitrant form and it takes decades or centuries for the active pool to be converted to a mostly recalcitrant state. For this reason, labile carbon (fresh roots, root exudates, and plant residues) must be continuously pumped into the system via plant growth to significantly increase soil C test values.

To maximize profitability from carbon credit contracts farmers must maximize the amount of C entering the system and minimize the amount of C lost. Cover crops are an optimal tool to maximize carbon earnings potential because they greatly improve an agroecosystem’s efficiency at capturing sunlight. There is no natural process more important to a farm’s profitability than photosynthesis – 95% of a mature corn plant’s biomass comes from products of photosynthesis, leaving only 5% coming from external inputs. Most row-cropped fields only capture max sunlight for 25-35% of the calendar year and this means these fields are missing out on free inputs from mother nature. By effectively deploying cover crops those same fields will be capturing light energy year-round. This means more plant biomass for microbes to consume and turn to plant-available nutrients. Many veteran cover croppers have optimized their agroecosystems to a point that external inputs are no longer necessary. The ability of a cover crop to sequester carbon is dictated by both biotic (living) and abiotic (non-living) properties of not just the soil but the whole agroecosystem (Table 1). 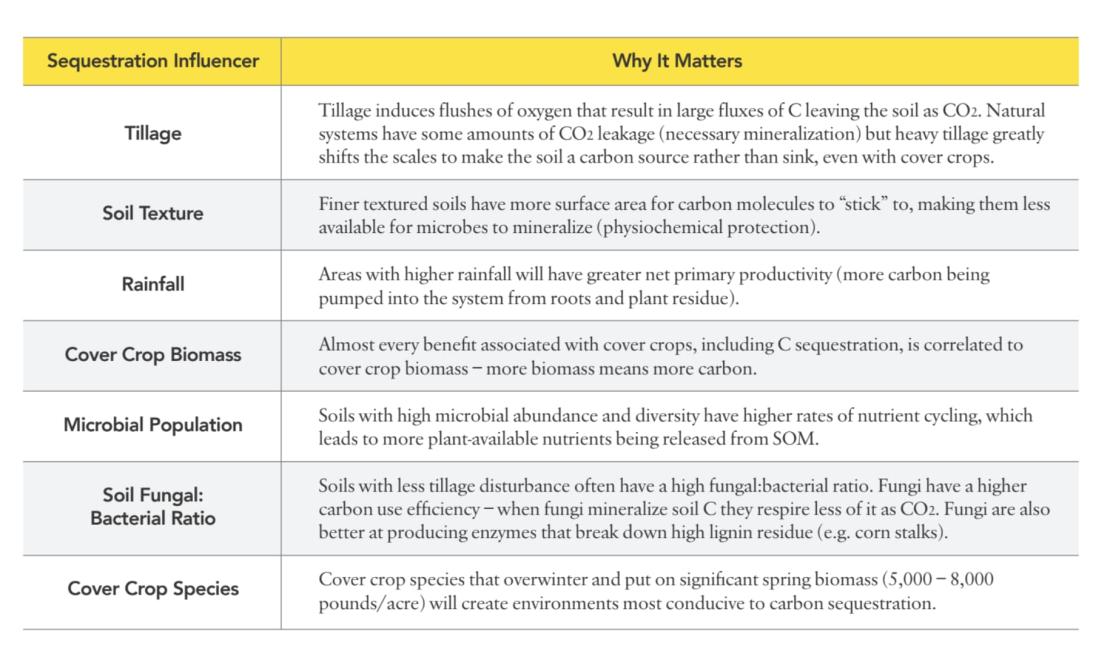 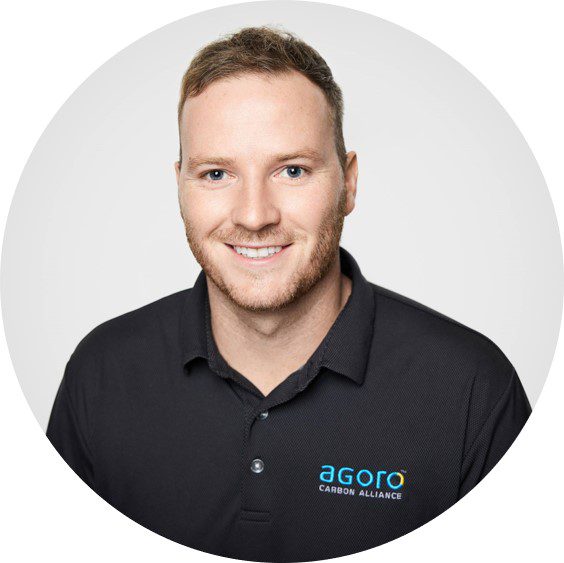 Caleb is a Certified Crop Advisor that grew up in rural East Central Indiana near a town called New Castle. He earned a B.S. in Biology and Botany, and an M.S. in Agronomy. During graduate school at Purdue University, Caleb researched the relationship between soil physical properties and cover crop diversity. He worked for two years at Beck’s Hybrids and specializes in mechanisms of soil carbon sequestration/storage. While the often misunderstood science of agronomy and pedology may have drawn Caleb toward a career in agriculture, ultimately for him it was the people in the industry that made staying worthwhile.

Get news about Agoro Carbon

Decide which cookies you want to allow. You can change these settings at any time. However, this can result in some functions no longer being available. For information on deleting the cookies, please consult your browser’s help function. Learn more about the cookies we use.

With the slider, you can enable or disable different types of cookies:

Save & Close
Talk To An Agronomist