Stay up-to-date on the next content published on the knowledge hub!

Growers are well aware of the yield differences and potential between fields on their farm. And the range of yield potential only grows the more we zoom out to a larger geographic area. This inherent yield potential of the soil is driven by many factors – slope, drainage class, clay content, CEC, and of course – carbon. And many studies have shown that an increase in soil organic carbon up to a certain threshold increases crop yield, and therefore a field’s yield potential (Diaz-Zorita, 1999; Oldfield, et al., 2019; Lal, 2020).

So to increase the inherent yield potential on my farm, all I have to do is increase soil organic matter, right? Unfortunately, it’s easier said than done – and just as there is a disparity between yield potential and regions, there is also one on carbon sequestration potential. Figure 1 shows the wide range of soil organic carbon (SOC) by region in the US. Soil organic carbon makes up approximately 50% of soil organic matter – a common soil health indicator. The greens and blues show soils with a higher level of carbon, many of these are in the northern plains and forested regions. Oranges and reds represent areas with low levels of soil carbon; these areas are mainly in the arid regions of the US.

Why is SOC different between soils?

To explain why there is such a disparity in SOC between regions, it helps to understand how SOC carbon originates in the first place. Much like coal deposits stem from ancient sources of decayed plant matter, areas with high SOC come from areas where there is high amount of plant decay. Not surprisingly, forests offer an environment that is constantly cycling decayed plant matter through the soil, contributing to the high SOC content in these areas. The most pertinent regions to agriculture though are temperate grasslands. Before row cropping came to the prairies, steppes, and pampas of the world, grassland accompanied by high organic-matter soils stretched uninterrupted for thousands of years. Each spring brought a flush of renewed plant matter that then died in the winter and decayed. This growing and decaying cycle gradually increased soil carbon over thousands of years to bring these areas to the high-organic matter soils they are today.

In addition to the seasonal weather swings, another factor was equally key to these areas building up enough plant matter – water. These grasslands received enough moisture – through rainfall, snow, and humidity – that enough plant, animal, and microbial life were able to grow to provide ample carbon inputs. And here lies a key difference between the SOC-heavy soils of the prairies and arid soils. While our prairie soils were amassing SOC our arid areas to the west lacked the moisture to support ample plant and microbial life. Moisture isn’t the only factor that affects the naturally-occuring SOC content; soil texture plays a large role as well. If we look back at the map of SOC stock in the United States, there is a large reddish, lower-SOC region that consumes most of western Nebraska. This region receives roughly the same amount of rainfall as the Dakotas to the north and Kansas to the south, but is conspicuously much lower in SOC than its neighbors? Why is this? It comes down to soil texture. Much of these high-SOC soils in the great plains have a healthy balance of sand silt and clay. Soils with an adequate amount of clay have a higher plant available water content, which in turn, boosts plant matter and SOC stocks. Much of western Nebraska is covered by the largest sand dune region in the western hemisphere. The sand content is so high, and the clay content low, that SOC hasn’t accumulated much in this region.

Even though these low-SOC soils are in arid regions, they can still support impressive crop yields. This is largely due to irrigation and then supplementing the soils with high amounts of fertilizer and soil amendments. But the potential to increase SOC is more limited than it is in the northern plains and the eastern US. This again, partly comes down to water availability. Not surprisingly, arid fields under irrigation have a higher capacity to increase soil organic carbon than arid dryland fields, because they produce higher yields and likely result in more plant litter left on the ground. This applies to a key point – when the amount of carbon inputs exceeds the amount of carbon removed, SOC will increase, albeit slowly in most cases. This principle couldn’t be truer than how it applies to cover crops. In cropping systems capable of growing covers crops, cover crops significantly tip the balance so that the carbon input further increases vs carbon outputs. Many an expert in soil health and carbon will tell you a cardinal rule of improving your soil – cover, cover, cover. The more you can keep your soil covered, whether it be through cover cropping or leaving stover on the ground through minimal tillage, the more your soil will increase in health. Cover crops are also especially advantageous in the west where environmental factors such as rainfall and wind can be sudden and severe eroding the precious amount of existing topsoil.

Unfortunately, increasing soil carbon in arid soils isn’t as straightforward as simply applying more water, growing covers, and producing a bumper crop. Consider yield potential of wheat compared to corn. Both are grass species, and both are adapted to growing in a wide range of regions. You can take meticulous care of your wheat crop by choosing the best cultivar, maintaining a top-notch fertility program, and vigilantly scouting for pests. Let’s say you get a very impressive dryland yield of 130 bushels/ac.; still, it will pale in comparison to your corn yield. The yield potential of wheat and corn is inherently different (largely because corn utilizes a more efficient method of photosynthesis). Let’s look at our classic arid soil vs a more organic-heavy midwestern soil. What if we apply the same amount of water, cover crop seed, and minimal tillage method; will the SOC increase the same amount in both the soils. Chances are it won’t, and the SOC will likely increase more in our midwestern soil. Why is this? The above shows a classic SOC curve after conservation practices are implemented. Generally, SOC will increase  at a given rate but then tapers off at a certain SOC level. This SOC varies greatly in different soils as Figure 3 illustrates. Because of differences in climate, soil depth, and minerology the arid soils of the western US generally have a lower SOC ceiling. Generally when we use tools, such as Comet Planner or Comet-Farm to predict soil carbon sequestration potential, a practice change such as minimal tillage will sequester an additional 0.15 t/acre of SOC each year; whereas, in the Midwest this same practice change could be as high as 0.45 t/acre. Even with the lower SOC potential that will likely occur in an arid soil, it is still worth the effort to increase SOC as much as possible. This is especially true in dryland production, where the largest factor in the yield gap is due to limited water. Even an increase in SOC by a fraction of a percent can have a positive impact on water retention and therefore yield. Over 20 years ago Utah State researchers applied manure to a dryland wheat plot in the desert near Snowville, UT; an area that gets less than 15 inches of precipitation a year. Today, you can still see visible effects of that increased SOC from the manure applied two decades ago, and that plot has yielded as much as 35 bushels/ac. more than neighboring plots. This is just one example of how increasing SOC can yield financial and environmental benefits. Perhaps the most compelling argument for increasing SOC lies with sustainability, meaning that the ground will become more resilient to weather and climate changes. And most important that means helping to keep that farm in the family for generations to come. 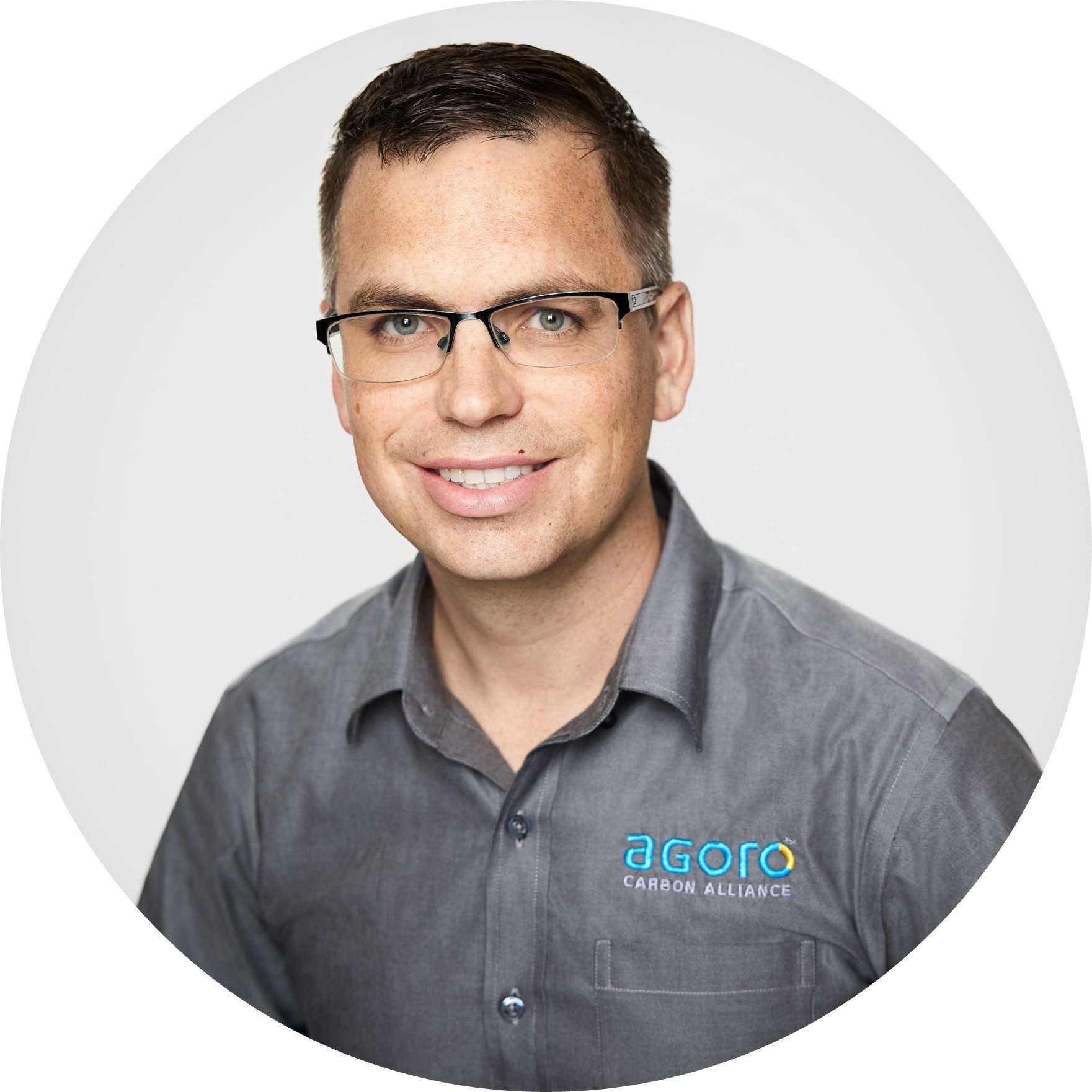 Matt has an eclectic professional background and considers his path in agriculture a non-traditional one. He specializes in soil moisture monitoring, arid soils, nitrogen management with cover crops, variable rate nitrogen management, and wheat and potatoes. Matt grew up in the suburbs of Ohio and Utah. He worked on horse ranches during a couple of summers, but it was his time spent in rural villages abroad that generated his interest in agriculture. He completed a year-long Fulbright project in Moldova, which helped him to recognize the importance of agriculture in economic development. Prior to getting more involved in agriculture, Matt served as a children’s educator, worked in the solar industry, and managed city recreational events. He earned his B.S. in Recreation Management from BYU and M.S. in Plant Science from NDSU. He gained experience during grad school working on various research projects, and later at Penn State as a research assistant managing corn and soybean trials (which involved precision soil sampling and cover crops). In 2019, Matt became the precision ag manager for Mountain West at Simplot, creating prescription maps and gaining expertise in soil moisture monitoring. During the last several months of his time at Simplot, he became increasingly involved with their internal sustainability team, working closely with a sustainability manager to estimate the carbon footprint of potatoes. His time with the sustainability group led Matt to an ‘irresistible’ opportunity with Agoro Carbon. Matt is a Certified Crop Advisor and is currently working on his ag irrigation specialist certification.

Get news about Agoro Carbon

Decide which cookies you want to allow. You can change these settings at any time. However, this can result in some functions no longer being available. For information on deleting the cookies, please consult your browser’s help function. Learn more about the cookies we use.

With the slider, you can enable or disable different types of cookies:

Save & Close
Talk To An Agronomist